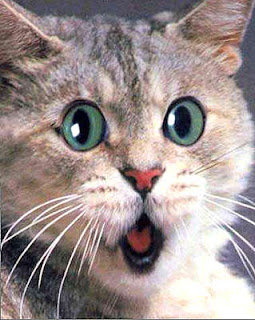 I see I have 12 followers now. Well, I don't want to stop here. I want to keep getting more and more and more and more, but for now, I just want to get up to 30 so I can reveal a little surprise for everyone following this blog. More than 30 would be great, too, because that would mean a greater chance of participation in this prize. So, help me promote my blog and get 18 more followers.

The countdown begins...
Posted by Amber Forbes at 12:43 PM 4 comments: 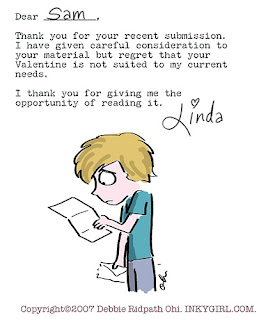 There are probably tons of agent and editor blogs out there about rejection and how to deal with it, but I don't think it hurts for me to write one about accepting rejection and moving on.

Everyone reading this blog should know that everyone gets rejected at some point in his or her life. I don't think I need to list any examples of great writers who have been rejected tons of times before going into print. Also, just because someone rejects you and you get accepted by someone else doesn't make the former person an idiot, okay? Everyone has different tastes in everything. Personally, I go for both a great story and beautiful writing. I want both, I crave both. I don't want a great story with decent writing. I also go for stories that have a deeper meaning beyond the surface. So, when and if we start accepting fiction bite contributions and your story doesn't have anything beyond the surface, it'll likely be a rejection from me. Of course, you've got two other editors to go through, so don't sweat it. And yes, you can write something that is accessible to everyone, but still has a deeper meaning. Wintergirls, anyone?

You've been slaving away at your story for months, or your novel for years, or even a flash fiction for weeks. It's your baby, your prize, your child. Like a child, you don't want to hear it criticized. You want to know that you've been a wonderful parent and raised it well. Well, I believe any experienced parent will tell you there is no such thing as a perfect mother or father. Once kids reach a certain age, parents have little influence. It's the same with your story. Once you've edited it to death, you have little influence on what happens to it thereafter. The best thing you can do is submit that baby and wait. And wait. And wait. Oh! Inbox! Aw...a rejection.

How do you deal with that? Realize that's one rejection. There are hundreds of agents and magazines and what not for you to submit to. Each one has unique tastes; thus, not all of them are going to like what you've written. And just because you've been rejected does not mean your story was bad or poorly written. Sometimes it just may mean the magazine couldn't fit you, you submitted at the wrong time, caught an editor on a bad day, or just submitted your Gothic story to a magazine that only accepts stories about ducks (please don't be a moron and do this).

I've been rejected plenty of times. Okay, I'll admit the short story I got published last year was accepted on the first try. I attribute that to half luck and half skill. The first magazine I sent to just so happened to like the oddness of it. And when I became a slush pile reader for that magazine, I discovered that one of the editors actually DID NOT like my story. The other editors, however, luckily did. So you can see what a close call accepting a story for a magazine can be.

There's a flash fiction I'm currently subbing right now. It's been rejected by every magazine I've sent out to on the first round. But you know what? Each rejection I've received doesn't miff me one bit, because I realize there are tons of other magazines out there, and I know one of them is going to want it. Plus, several of my rejections have been personal, mostly saying it was a well-written piece, but wasn't the right fit. Another rejection letter also said they were so close to publishing my piece, but I suppose it was a tight choice between my story and another. Rejection letters like that should actually encourage you to keep submitting. I know it did for me, and it boosted my confidence as a writer. I know I belong in the big leagues now. All the magazines I've been currently submitting to have a 2% acceptance rate.

So you say you're not getting personal rejection letters? There are a number of reasons for this: the magazine just doesn't have time to do all that, or maybe your piece isn't that good, or whatever. If I received impersonal rejections on my first round, I'd consider giving that story a second look. Send it out to beta readers and have others critique it like crazy for you. But I wouldn't bring myself to that point. For me, I have others critique it to death until I know it can't be critiqued anymore before I send things out.

Believe me, the first rejection I ever received did sting a little, but I wasn't depressed. I also wasn't bitchy because I had done my research to death about the publishing industry ahead of time to know that rejection was inevitable. I ended up scrapping that first story, but it didn't hurt me at all to do that.

While you're submitting query letters, novels, short stories, whatever, you absolutely need to be working on other things. Because I do have other things to work on, I often forget I have stories out on sub, and the only reason I remember is when I either open up my excel document that keeps track of all the things I submit to, or I get a rejection letter, or some form of newsletter from the magazine I've submitted to. Do this, and I can guarantee you getting a rejection letter is not going to kill you.
Posted by Amber Forbes at 7:51 AM 3 comments: