I Have a Dark Secret 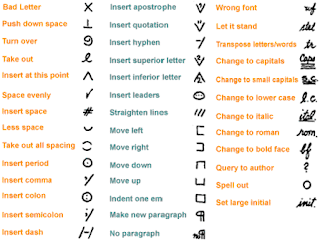 So if you don't know yet, I intern for Georgia McBride's fabulous YALITCHAT: YALITCHAT as its Editorial and Communications Intern, but primarily editorial.

Several weeks ago she asked me to edit the entire website, and I did. Well, yesterday, she sent an e-mail back reporting that people were saying there were still typos. I just went O_o to the whole thing, because I panned each page about three times AND used MS Word to boot. She then told me she was having two other people, plus herself, I believe, check the pages as well.

This got me thinking about editing in general, both novels and magazines and anything that's ever needed editing. Self-editing is included in this as well.

Have you, as a writer, ever sent anything out to a beta reader, only to have it returned with the beta reader pointing out things that look like they should have been obvious (blatant typos) before you sent it off? That's happened to me on several occasions. It's crazy how the human eye, even if you are being as careful as possible, can still gloss over things that should seem obvious.

When I went back into editing the YALITCHAT pages, I did find several typos that I couldn't even believe I glossed over! This makes me grateful that Georgia did employ others to look as well.

And novels: we all know it takes an entire editorial staff to spruce up a novel, and some novels still get published with typos. Crazy right?

As for me, when I'm editing a piece for Sorean, I'll go over it about six times, or however many times it takes me to stop finding errors. (Believe me, I do reach that limit, unlike with my own stories.)

But all of this just has me thinking how even the most simplest thing, whether it's a one-page report or a memo, can still have typos because of how careless the human eye can be, whether or not you're trying to be careful.

In conclusion, my dark secret is that editors are far from perfect. Some people out there get absolutely annoyed when they find typos in published novels and believe it's some sort of amateurism on the editor's part. But these people have absolutely no indication of what the editorial process is like, or even understand their own eyes, for that matter.

Those tricky, deceitful eyes!
Posted by Amber Forbes at 10:13 AM 3 comments: