Nailing That First Chapter Part One 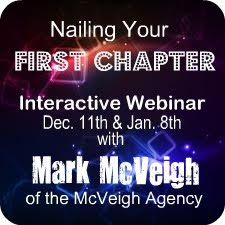 Two days ago I attended this nifty little webinar, which you can attend again, I believe, January 8th. I would have blogged sooner, but fever took me, and so I was down for two days. But now I'm better and back with a little advice on nailing your first chapter.

In any case, first chapters are crucial to nail because this is the chapter agents are going to first lay eyes on, the chapter that's going to make or break your chances for a partial, and the chapter that gives them an indication of your writing skills. I could go on and on about its importance, but I'm praying a lot of you reading this already know why it's so crucial.

So what makes a successful first chapter? What is the anatomy of a successful first chapter? For starters, you have your hook. Here's the hook of my first chapter: "Rivulets of blood stream down my back, splashing red dots on the parquet floor that look like cherry spatter." What does my hook establish? Voice, for one. Perhaps a little bit of setting, as well. The only time I see the word 'parquet' used is books taking place in the 19th century. There's also a little bit of conflict, too, because there's a reason blood's sliding down my MC's back.

Your hook needs to establish your character and some conflict. A hook involving description setting isn't going to do it, because your character is not involved, the setting is not your character, and while you may be trying to establish mood, you can do this after you've established your character. There are tons of examples of hooks you can find scattered all over the internet, but one thing most hooks have in common is change: something is about to happen that often causes change in the character. Those are the best hooks, in my opinion.

After the hook, you have your first 150, which is another chance to lose the attention of a literary agent. You have a lot to establish in 150, but you also don't want to put too much in the first 150. You need to establish setting, character, voice, and conflict (the reason why you're opening up with this particular scene in the first place), and while these are only four things, they can in fact be a lot if you haven't properly established these in the first 150, and I can tell you a lot of writers don't. My best advice for the first 150: don't even think about the rules, because if you think about them too hard, think about what you still have left to establish, you might end up with a convoluted mess. That's what I did when I re-wrote my first chapter, which took about two and a half hours, probably, and I did my best to ignore all the "rules" out there while unconsciously bringing them out in my writing. But, according to my IE, it's a successful first chapter, and while a writer just starting may not be able to manage that, it takes practice. Lots and lots of practice. And being able to handle criticism and realizing when that criticism is going to change your chapter from diamond in the rough to a polished gem.

Even after your first 150 you're not safe. An agent can still choose to drop out of your first chapter if you can't hold his or her attention with tension, voice, conflict, characterization, and so on and so forth. And those are seriously hard to manage. Next blog post, I'll tell you what successful first chapters do and how you can possibly write one.
Posted by Amber Forbes at 4:40 PM 1 comment: