Writers Who Are Teens

Notice how I didn't put 'teen writers?' Being considered a 'teen writer' or even a 'young writer' has always had a negative connotation to me. To me, it implies your writing will suck, no matter what, and your experiences are somehow less than of an adult's simply because you are young.

Adults will tell teen writers their writing sucks because they are teens and don't have the mature experiences of an adult. My problem with this statement is it infantalizes teens as people who cannot think reasonably on their own, who have to somehow grow up and step into the magical world of adulthood to suddenly get everything. I'm almost twenty-one, so I'm definitely not that far from being a teen, but I can tell you even as you grow up, you still aren't going to get everything. You never will. Adults will tell you that you must experience more, do this, do that, in order to be a great writer. While I will admit experiencing something often produces better writing, this is with anything. I certainly cannot write about the Igbo people in Africa, even though I've read about them, because I have never met them or even been to Africa. Research could help me write about them, but research and experience are two very different things, and it shows in your writing.

The great thing about being a teen is you can make an excellent young adult writer because you are young adults. You are experiencing your life as a young adult, you know what's in, you know what's out, you know what teens say, do, think, and feel, and you don't have to go out of your way to experience being a teen. It's just there for you. Now I think I hear the condescending writers exhale deeply as they say 'But they're biased about their experiences and can't articulate them well!' You can never articulate an experience immediately after it happens. I had a huge fight a few years ago that took me five months to be able to accurately convey on paper. I haven't found a magazine for it yet, but I have been receiving positive rejections that personally tell me why they liked my story but couldn't accept it because they either already had something similar, or it was between me and another person. Plus, I've been lazy about submitting anything lately.

Yes, it does take experience to be a good writer. This is a given. Someone who just starts writing in their thirties is going to be in the same boat as a teen who just starts writing. The only difference is they have more experiences to draw upon and perhaps a better grasp of grammar (but as a writing tutor, I can attest to the fact that I know more young people with a better grasp of grammar than many of the adult students I get. This isn't bad. This is just to say these adults have been away from school long enough to forget things.). I was also stubborn as a teen and taught myself everything there was to know about grammar in middle school, so sentence structure was never a problem for me.

Now the condescending writers step in and ask, 'How were you as a teen writer?' Well, I published a short story that wasn't in a teen magazine, but when I first began, of course I sucked, and I don't attribute this to my being a teen. I just attribute this to my being an inexperienced writer, just as I would attribute any poor writing to being inexperienced. A friend of mine recently submitted a short story to our magazine, and I'll readily admit said friend is in mid twenties, and said friend's story was how I pretty much wrote in high school. Said friend also experienced far more than I did in high school, but said friend is also an inexperienced writer who just needed a good critique. I just needed a good critique back then, and I do regret not realizing writing books existed back then, or that there were people who actually *gasp!* critiqued your work for no money. I'd probably be querying my novel by now if I had realized there were those resources available for me, but I'm ashamed to say I didn't discover them until my senior year of high school! The internet wasn't so easily available to me throughout middle school and half of high school.

Age doesn't matter, oh writers who are teens. It's experience that matters. Writing experience. Read lots. Get lots of critiques. You may be published in your teens. You may not. That doesn't matter. How well you write has nothing to do with your being a teen.
Posted by Amber Forbes at 8:40 AM 3 comments:

I am an English major as well, though I am on the rhetoric and composition track. I feel her pain. While I love to read literature and can write well-written literary analysis essays, it's not my passion and something I likely won't do ever again once I graduate.

In any case, somebody decided to pose the argument that all creative writers must be able to effectively analyze literature to write compelling prose. I cry poppycock at this statement. While I believe writers do need to know the basics (theme, symbolism, ect.,), I do not believe they need to know how to analyze literature to the depths an English major must do to write compelling prose. Plus, we English majors constantly have to read the classics, and let's face it: the classics aren't for everyone. While writers must give them a chance, they shouldn't force themselves to read the classics if the classics don't fit their taste. What worked then doesn't work now. No one would get away with writing wordy prose you find in many 19th century classics. Also, while writers should constantly expand their horizons, it's often best for them to pay careful attention to the type of prose they write, whether it be middle grade, young adult, fantasy, or sci-fi, and not the type of prose that Emerson or Austen or Orwell writes, because, again, what worked then will not work now.

Writers need only analyze literature the way writers should, not the way English majors would. Writers only need to analyze literature insofar as plot development, character development, and the like are concerned. They do not need to analyze literature that concerns, for example, how the social mores play out in a particular story, or how women are subtly treated as inferiors to their male counterparts, or how space plays an important role in a particular story. That is for English majors, not writers, to do. What writers do need to pay attention to is how Main Character is developed throughout the story in relation to other characters, or if Main Character even develops at all. Writers need to look for what the author did good and why and what the author did poorly and why. This is not something we English majors look at or are even allowed to criticize. We English majors can only critique the argument of another person's analysis, but we cannot critique the author's writing the way writers should know how to. What literary critiques analyze is far different from what writers analyze. Literature classes DO NOT TEACH YOU how to analyze literature the way writers would. They only teach you how to analyze literature the way literary critics would, or even readers would--even then it is primarily literary critics who would analyze something as space in a story. Readers, in a commercial sense, would read a story similar to the way a writer would: how the plot, characters, ect. are developed, though they do not necessarily pose solutions on how they would fix it as writers would.

All in all, writers analyze literature differently from English majors. So don't despair if you as a writer cannot analyze literature to the depth and complexity of an English major. Your story can still be compelling without you as a writer trying to expose some social truth. If readers want to analyze literature to that depth, they'll often find something you didn't even realize you had written. I don't even think most literary greats of the past wrote with the idea people would find all these things we have today. Poor writers are often those who do try to write with purposed complexity, rather than just trying to write a compelling story with compelling characters readers will relate to. And I am speaking about this as a literary magazine editor who has received stories in the past that try to expose some social truth but often spend pages upon pages with characters musing over some object that is supposed to be symbolic of some greater truth. It's convoluted nonsense. Just write what you want to write and don't worry about trying to put some literary depth to it.
Posted by Amber Forbes at 7:56 AM 4 comments:

Issue 2 of The Corner Club Press 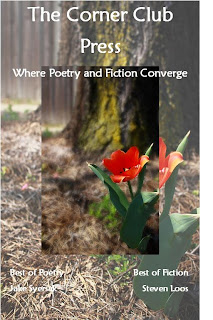 Our issue 2 is out, and you can check it out here: http://www.thecornerclubpress.com/issues.html

Follow me @AmberSkyeF for The Corner Club Press updates, and fan us on Facebook just by typing our magazine name in the search bar.
Posted by Amber Forbes at 8:11 AM No comments: